It’s Thanksgiving this week and the focus around here is turkey and being thankful. The turkey part is easy. You go to the store and select the bird you want and bring it home and prepare and roast it.

It’s the thankfulness part that is trickier. We’re not very good at it. If you’re like me, I frequently forget to thank God from one day to the next, and one week to the next.

That’s shameful considering the very air I breathe is his. 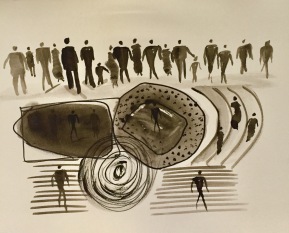 Not only that, God did the most scandalous thing in the world. He rescued us from his wrath and judgment and hell. This he planned long ago, before the world was made. Then he sent his Son in time and space to bring us salvation, a gift we didn’t deserve, all because God wanted us in his family. We didn’t ask to be rescued. We didn’t even think we needed to be rescued. That’s how deep sin goes. But God knew our deepest need was to know him and have him as our God. He chose us. We are now new creatures in Christ. And in the resurrection of his Son he is re-creating the world. And one day God will usher in the new heavens and the new earth where we will live forever.

That’s what we need to be thankful for. It should take our breath away.

Not only this week, but every day.

I got on the subway this morning and had an option of seats. To sit alone in a one seat with no seatmate or in a two-seat. I chose the one-seat. I could be alone and not have to accommodate anybody. Yay! Usually big, burly construction workers sit next to me leaving me with an inch to breathe. Not this morning. I was going to relax all the way into city. As soon as I sat down and settled my bags, I felt the Holy Spirit nudge me. “So. You don’t want to speak this morning about Christ?” Gulp. Before I could argue with him, I said, “Okay. I’ll move.”

So I did. At the next stop a young Asian woman sat next to me. So this must be who I’m supposed to talk to, I said to myself. She whipped out a cosmetic sponge with make-up on it, held up the dark screen of her iPhone as a mirror, and put her face on. (Note to self: iPhone screens make good mirrors in a pinch.) I began to read field reports from a missionary agency I support that take the gospel into unreached people groups. I was totally absorbed. When I finished, I looked and my seatmate was sound asleep. Must not be her then, I thought.

We arrived into the city and she woke up. It’s now or never, I said to myself. I pulled out a gospel of John and handed it to her.

“Would you receive this as a gift?” I said.

She looked at the booklet in bewilderment. “No,” she said.

“Have you ever read the bible?” I said.

She shook her head no.

“Try it, you might enjoy it. It changed my life,” I said.

“Okay, I’ll read it,” she said and took it. She got up and left the train at her stop.

I was prepared to ignore the world this morning. That’s the truth. But the Holy Spirit is always on duty.

It’s that time of year again.

This year I’m staying clear of them.

I’ll let you make them.

I’m not going on a diet, buying a gym membership, eating healthier, or being nicer to my brother.

I am staying just the way I am. Plump, self-indulgent, and cranky.

I don’t like failure. Who does? I don’t want to start the New Year in the negative. I want a few weeks of blissful self-illusion.

Have you noticed as the year begins how your inbox expands with tips for improved living? How to speak Italian in six weeks. How to find the mate of your dreams online. How to improve your relationship with your therapist. How to write a memoir.

All it takes is money. And sweat.

You’d think everyone would see the hype, but every year there are enough desperate people who believe the gimmicks.

The truth is we all want hope. Every one of us wants to be thinner, healthier, younger, and wealthier.

But have you noticed how these things promise results but deliver disappointment?

The gym banks on you dropping out.

The recipe you’re making only works on TV.

If we put our hope in things, we’ll soon discover we’re bankrupt.

There’s only one place to put our hope and it’s in a person— Jesus. When he makes a promise, he delivers it. And he promised that if anyone puts their trust in him as Savior, he will forgive their sins and give them eternal life.

And this is the will of him who sent me, that everyone who sees the Son and believes in him may have everlasting life; and I will raise him up at the last day. – John 6:40 NKJV

Now that’s my idea of success. The sure kind.

Why bother with lesser promises that don’t deliver when you can have God guaranteed-ones?  Instead of self-improvement propaganda, find the lasting improvements only God can offer.

I’d rather be chunky and happy in Jesus than nasty and model-thin without him.

How about you? Are you ready to put your hope in Jesus?

Who is responsible for your maturity in Christ? Is it all about you and your obedience or is all the Holy Spirit’s doing?

Do you have days when you feel you’ve done nothing but blow it as a Christian? You haven’t loved well, you ran out of patience, you didn’t think about God for an instant.

What does God think of you when you’re in that condition?

“Return to your baptism everyday,” Luther said. Remember you died in Christ, were buried in him, and were resurrected in him. All your sins are forgiven and washed away. God sees them no more.

You have been set free to live as a believer in Christ.

Before faith, you were a slave to sin. You couldn’t love or serve God. The only things you could do were to:

3) heap judgment on yourself

But God, who in his mercy called you from death to life, who gave you the gift of faith to believe in Christ and him crucified, now enables you to freely love and serve him.

You are a freed slave learning to live as a free man or woman in union to Christ.

How does this work out in daily living?

Justifying faith is God acting upon you – you are a passive recipient. He changed your heart, he made you capable of believing the gospel. You didn’t produce that yourself. You had no power.

Sanctifying faith is accomplished by the Holy Spirit who causes you to desire God and enables you to obey God. This new action will result in your good works.

You will produce fruit.

So if you’re worried about how you’re doing, don’t be. Looking inside your heart will demoralize you. It’s not pretty in there.

The solution is to keep looking to Jesus.

He’s the author of your faith, and to God who will give you everything you need to keep loving and serving him.

Have you noticed an increase of motivational speakers lately?

The more the world unravels the more upbeat these guys seem to be. (Most are men. I think women know better.)

You know the type.

They challenge you to make your life count.

They tell you to change the world and make an impact for God. And then give you a zillion pointers. They call it a blog.

What about the super-godly who want to die with their boots on? (I don’t have boots. What does that say about me?)

How do you respond to these calls for excellence?

I’m a cynic at heart so my reaction is: Oh yea? Show me what you’ve done lately
to stop the rotation of the planet.

I hate these guys.

They’re appealing to the flesh. My flesh. Of course I want to be great and important. Who doesn’t?

Don’t misunderstand me. I’m all for excellence. I ripped a new play apart last week because it could have been so much better. (And I wished I had written it.)

I’m all for success. My success. I really don’t care about anybody else’s except maybe my children’s.

I know that these things in themselves aren’t bad. There’s a lot of mediocrity that passes for excellence, like that play, and so a slap on the head is a good thing.

But the question is: is this where God is calling us?

I know he tells us to be perfect as he is perfect, and that without holiness we will never get to hang out together. That’s quite a standard to live up to. It pales in comparison to the motivational mantras of becoming rock stars.

However, I’m not sure, given all the right resources, that we can even live up to being mediocre.

Even mediocrity has its standards that are hard to achieve.

I have a motivational poster in my office that says: “Ineptitude: If you can’t learn to do something well, learn to enjoy doing it poorly.”

I’m learning to follow Jesus poorly. I don’t get it right. My motivations are wrapped in me, myself and I – my favorite trinity.

I need a Savior. That’s why Jesus died for me.

My real status is bound up with his. God captured me, subdued me, and extracted me from the world and put me into the kingdom of his Son. Don’t look at me like that. It was God’s idea.

So maybe the challenge is not so much what I can do for God that is so great, but what God has already done for me which is enormous. I need to focus on that.

And then tell somebody else so he can wipe the sweat off his brow and know he’s not alone.